To get to the south we took a bus from Quba down to Baku, (3 hrs, 4 manat) and transferred to another bus down to Lankaran (5 hrs, 6 manat). Important to note that bus departure times are only a suggestion, nothing leaves until the bus is full.

Right at the bus station in Lankaran there is the best hotel we have stayed at so far, Xan Lankaran.  I will have a separate hotel review section at the end of the Azerbaijan trip with a more detailed description. Prior to arrival I checked online that there are rooms available and decided not to pre-book but to try to negotiate the price.  I was right; we got it for 65 instead of 70.

The next day we took a marshrutka (shared mini bus, 1 manat) from the bazaar to Astara.  Astara is interesting for 2 things, one is the beach, which we couldn’t use since it’s still very cold and the second one is the border crossing to Iran. We couldn’t use it either but for some reason it was a fascinating experience just to come close to the border.  Since at this point our chances to ever go to Iran are lower than going to the moon we were excited just to be there and to take photos.

As we were talking to people on the marshrutka we learned that many Azeri and Talysh people have relatives across the border who they visit regularly.  Apparently, Astara was divided in two when the border between Azerbaijan and Iran was negotiated during the Imperial Russia and thus half of the town is on the other side of the border.  Interesting bit of info: there are more ethnic Azeri living in Iran then in Azerbaijan, and Azerbaijan in fact has the second largest population of Azeri. Many Iranians living on the other side do come here as tourists and as such this border crossing is very active.

On the way to Astara there is a place called Yanar Bulag, a burning spring, where one can light up the water becaue it has natural gas emiating together with the water.  The marshrutka driver made a stop especially for us so we can try to ignite the water.

On a subject of talking to strangers, the people here are extremely friendly and hospitable.  Sometimes it becomes tedious to answer their questions but we are trying to keep in mind that they are doing it because this is how they show that you are welcome in their country.  Unfortunately we are not used to kindness of strangers and therefore it seems odd but theirs is definitely touching.  An old woman on the bus asked thru a guy who spoke Russian where we are staying and whether we need a place to stay and if we want we can stay with her. I was touched and frankly embarrassed to name our hotel because I am sure that one night there is more than she has to live off for a month.  Another example is our driver who took us to Lerik the next day. When he heard that we are taking a night train to Baku he insisted on taking us to buy food for the road.  He made sure it’s good and fresh and that we are not being ripped off.

After doing the photo op at the border and enviously saying goodbye to our bus comrades as they went thru the crossing we walked around unmemorable Astara, had some tea in a chayhana, and left back to Lankaran.

Lankaran doesn’t have many sites either, we walked around, checked out couple of statutes and bought a train ticket back to Baku for the next day.  The ticket purchase was somewhat a lengthy procedure, due to lack of electricity and computer operation skills of the person at the window.  On the other hand people are so nice that we can’t get upset and we do have the time…

Lankaran is famous for its food and Lankaran tea. Their national food is lavangi, it’s a mix of vegetables and nuts and they stuff it into the food, so you can have chicken or fish or eggplant lavangi. It’s very tasty.

Next morning we checked out the old Stalin prison, where he was held before the revolution (unfortunately he was released from there at some point). The place didn’t have electricity which is my understanding happens a lot here but there were two very nice ladies who showed us around while we used our phone’s flash light. They didn’t speak either Russian or English but there were enthusiastic to show us the place.  Being Stalin’s prison is the least interesting feature of this structure.  It used to be some Shah’s palace in the 18th century, and although completely decrepit with parts of the roof fallen in, the place is awesome.  It’s a red brick solid structure with huge rooms with enormous ceilings, beautiful twisting staircase and a room for roof garden.  We told the ladies and they wholeheartedly agreed that the place would make for an awesome hotel and garden restaurant. 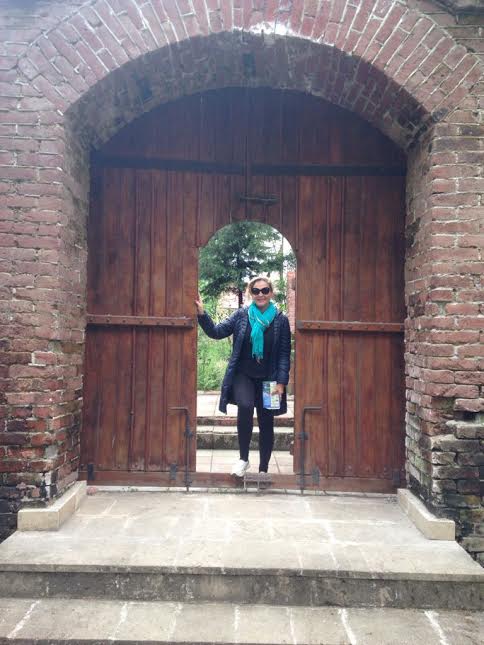 After this visit we were lucky to catch a taxi with a really nice guy who took us to Lerik, about 60 km away and stayed there with us for few hours (for 20 manat).  The road to Lerik itself is very beautiful going thru the Talysh Mountains.  Talysh are lower then the Caucuses but much greener.  Besides its beautiful pastoral setting, Lerik is famous for the longevity of its residents.  The oldest documented person in the world was from Lerik and died at the age of 168!!! They have a longevity museum and had a birth certificate of the said gentlemen. The director of the museum enthusiastically took us thru the exhibition proudly showing photos of the elderly and at the end gifted us some special tea that grows in the area and is supposed to help live longer.  We also learned that long life does have a genetic element, plus those people do not smoke, and work all their life outdoors. She also admitted that the number of the “long-livers” has been decreasing, probably due to ecological problems. As to the effect of the tea I will keep you posted.

In addition to the longevity museum we finally visited the Haydar Alieve Center.  I say finally because each town and village has such center dedicated to the former president and the father of the current president so we decided it’s time to see one of them. It was surprisingly interesting and informative. 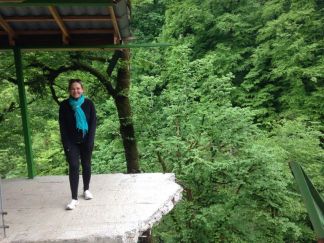 At the end of the day our driver took us to the night train station.  Another example of the people here is that our driver didn’t want to take extra 3 manat (about $2) that we wanted to give him at the end of the long day.  He was insisting that we need it more because we are traveling and probably need it. We did force him to take the extra money and I swear he was tearing up …

The Baku night train was a lot of fun (8 manat p/p), except for the toilet of course.  It was a 4 person’s car but we were lucky to be just us.  They gave us clean sheets sealed in a bag and the mattress was quiet comfy. Thanks to our driver we were prepared with good food and couple of bottles of wine.  Turned out that alcohol is not allowed on the train and can result in a fine…and I am not admitting to anything here…

End of the south trip.