On our way to Borjomi from Tbilisi we wanted to spend a day in Gori, a town whose claim to fame is being a birthplace of Joseph Stalin. We took a marshrutka from the Dedube Station (3 GEL) and an hour later were dropped off at the back of Stalin Museum right in front of Gori Tourist Information Office. I must comment that this is the nicest Tourist Information Office so far.  I previously called them to ask if there is a place where we can leave our luggage for few hours and they told me that I can leave it with them.  This helped my travel plans a lot because otherwise we would have to visit Gori as a day trip from Tbilisi and loose a day. They also gave me info regarding transportation out of Gori to Borjomi.  What’s more, when we showed up with our luggage the woman at the Tourist Office knew who we were and was glad to meet us and gave us some more info, maps and restaurant recommendations.

We crossed the street just in time to catch a guided tour in Stalin Museum. This was something!! I read before that they present Stalin in a positive way but the tour was absurd. The guide, who seemed to be an intelligent educated woman (I base it on her manner of speech and her vocabulary), lovingly presented Stalin’s memorabilia on display. She emphasized that he was a highly intelligent educated and well-read person. He possessed an inhuman amount of talents in sciences and the arts.  When showed his letters she pointed out to his beautiful handwriting. At this point my imagination began to wander to a possibility of a Hitler museum and her telling the group of his love of arts and dogs..

This continued for about an hour.  Stalin didn’t execute his real and imagined enemies; he “removed” his opposition. There was an unspoken assumption in the air that we all knew who Stalin really was but this was not to be mentioned. He was a hero who took a backwards agrarian Russia and left it as a nuclear power not to be messed with. The word GULAG was never mentioned; the victims of his regime were just a necessary collateral damage and the goal justified the means. His wife’s suicide was blamed on her fragile mental state and frequent headaches “even though he (meaning a good husband), sent her abroad to be treated”.

Stalin’s daughter, Svetlana, was dissed because she left Russia and “neglected” her children. The guide happily gloated that when Svetlana came back to Georgia her children didn’t want to see her. Getting rid of Trotsky was a necessity because Trotskyism is a very dangerous ideology and I am quoting verbatim “all those people running in the woods are Trotskyists” (?!). I think she has confused Trotskyism with anarchism but who knows..

But the cherry on this shit cake she was feeding us was the final statement. She took a deep sign and said: “and then there was Hruschiev, same as Stalin, no better”. Yeah, Hruschiev wasn’t getting any humanitarian awards but he released millions of people from the GULAG, ended the reign of terror and “removed” Beriya. Just that is enough to be considered way better then Stalin. As we left the museum we kept laughing at the tour trying to remember all the “pearls” we just heard.  With that ability to spin facts this woman can easiliy have Sean Spicer’s job.  What’s unfortunate is that we, who know Russian history having roots here, can see thtu the bullshit, but some young foreigners who don’t know the history may leave with an impression that Stalin was a hell of a guy. 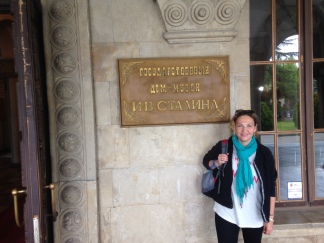 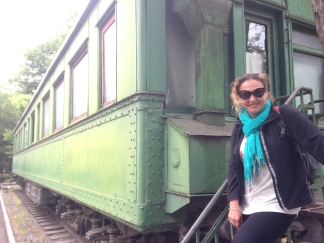 Next, we went down the block to the War Museum, an excellent presentation of WWII.  Roman who is a WWII buff was impressed.  However, again, it was sad that after the exhibits showing the heroic efforts of WWII, the two newest exhibits showed Georgian wars with Russia (1993 and 2008). Basically, people who fought together in WWII are constantly fighting against each other after the collapse of the Soviet Union and I find it very unfortunate.

After finishing with the 20th century history we caught a cab to Uplistsikhe, a cave city about 20 minutes out of town.  It’s an enormous impressive ancient city (ruins) that require at least one hour to be explored. 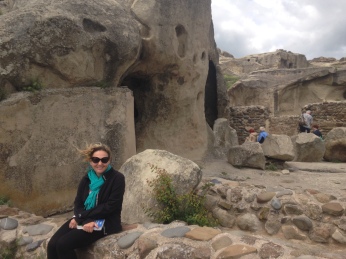 At this point it was getting late and time to eat before our 4:10 pm bus to Borjomi.  We chose café L’Avenue recommended by the tourist office and were not disappointed. Had a great meal and made it in time to our bus.