So far we have traveled into certain countries notwithstanding geopolitical issues and entered into countries that are in conflict with their neighbors without fear since we are not part of such conflict. We are pretty much in denial; not our conflict not our problem. Of course I would not travel to North Korea or similar scary places but otherwise all our moves so far were pretty smooth.

Unfortunately, Abkhazia is different and the aggravation of coming in and going out is not worth it!!! For some reason, this dilapidated country which is in dire need of influx of money and tourists is actually not welcoming to tourists.

In order to enter Abkhazia you need to send an online application to their Foreign Ministry and receive an approval within 4 days. The approval is not enough.  If you manage to get in the country after an unpleasant border experience you need to go to Sukhumi and actually get a paper visa costing 400 rubles.

After leaving the Georgian post there is an about 1 km walk over a bridge to the Abkhazian side.  The road now is pedestrian and is completely empty. It made me sad.  I imagined that only few years ago this must have been a busy road full of cars and buses with tourists traveling up and down the Black Sea shore enjoying their vacations. Now, it’s a sad abandoned no mans’ land. Only lucky dogs are running on the bridge ducking under the wired gates in and out of the border.

We stayed in Abkhazia for about 30 hours and felt that we just wasted our time. This small world of ours is too big to waste time. It was probably a beautiful piece of the Caucuses at some point but now it’s a poor war ravaged Russian satellite.   Our first stop was Sukhumi.  You can get there from the border by marshrutka for couple of bucks. We stayed in a pretty nice but not very central hotel Leon ($68 with breakfast –nonnegotiable). The rooms are small, modern, with balcony and good sized bathroom.  After resting a bit we went to explore the town.  Some efforts have been made to attract the very few tourists walking back and forth on the main town promenade by the shore.  A small stretch of the promenade had renovated houses and freshly painted main square, but that’s it. The beach is pathetic unorganized full of boulders and some unidentified pieces of concrete sticking out of the water and/or just lying on the so called beach. The tourists seemed to be from poor working class, and there is no judgment in this statement, only sorrow that they cannot afford anything better. We had a very basic and decently priced dinner on the main promenade. It was a wooden two story structure.  Overworked overtired middle aged waitresses who looked like they are on their last legs were running up and down the stairs to serve food. No wonder, their faces looked stern and severe Soviet style. But if you say couple of nice words like complementing the food the faces lit up.  After dinner we didn’t find any other entertainment and went back to the hotel.

The next day after getting the visas (surprisingly fast and painless process) we left this sad place and took a marshrutka to Gagra. It’s about an hour and a half trip for 100 rubles. On a bus we were talking to two mothers who came from Siberia on a four day train ride with their young children to spend their vacation in Abkhazia. They were obviously tight with the money and in order to save on a ticket fare they had three kids on their laps.  It was heartbreaking to me that they had to travel a long distance making such an effort and all they can give their children was this sad looking place.

We arrived to a central train station in Gagra, which turned out to be formerly gorgeous but now completely decrepit grand art deco building.  The front door was shut with wood planks, windows broken and the façade peeling. Again, I could see how this must have been a happy busy train station full of people, trains and buses bringing people in and out to have a good time on the Black Sea. Somehow, they did have an operational luggage storage which we used while exploring Gagra. 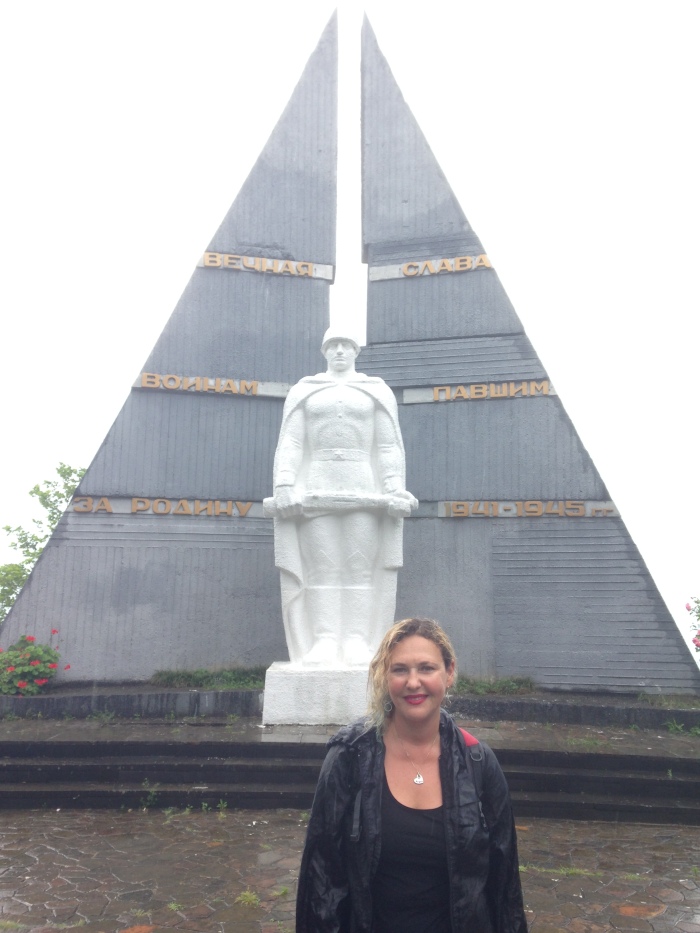 Gagra used to be the jewel of all vacation spots in the Soviet Union.  It had a special meaning for me because according to the family legend my parents who knew each other as kids, became reacquainted in Gagra at the age of 20 and the rest is history…

Obviously, I wanted to see that place for myself.  While better then Sukhumi, Gagra is not Code d’Azur…To be fair at the beginning it was raining very hard but even after the rain has cleared it was still pretty gloomy. After a short deliberation, we decided not to waste any time for lunch; picked up our luggage and went to the border.  #Another unpleasant experience….