For the ones who can’t take the suspense, we didn’t really see them, but nevertheless I want to write about our experience because I was not sorry even for a moment of going literally all the way to the end of the world. And by the way, this was February and about -10-12C…

We started our trip on a train from Moscow, Leningrad Train Station.  There are two daily trains making a 37(!) hour journey to Murmansk, but the trains are not identical. One is an SV (specialized) luxury train called Arctika and the other one is a “regular” cheaper train. We opted for the Arctika and got a two person extremely comfortable compartment, with nice snow white bedding, towels, slippers, toiletries, flat screen TV, unlimited tea, chocolate and an attentive service.  The ticket also included one full meal either served in the compartment or in the restaurant. My biggest fear was the state of the common bathroom on a 37 hour trip, but the entire train and the bathroom especially were extremely clean and were constantly cleaned during the ride. At some point even the train manager came in to ask if everything was to our satisfaction. Needless the say that we were more than pleased and relished the experience (especially after our recent train experience in India, see my Goa blog).  The price of the tickets varies just like airfare: the earlier you book the cheaper is the ticket. We spend a total of two nights and a day on the train and frankly I was sorry that the trip ended.  I felt that I could go for another week and at this point I am considering the Trans –Siberian train for the future. The full day on the train coincided with this year’s Valentine’s Day which we celebrated with a brunch in our compartment  and a dinner in the restaurant. The only minor inconveniences were lack of Wi-Fi connection: it worked only at the train stops and lack of variety on TV: one channel showing very old Russian movies. 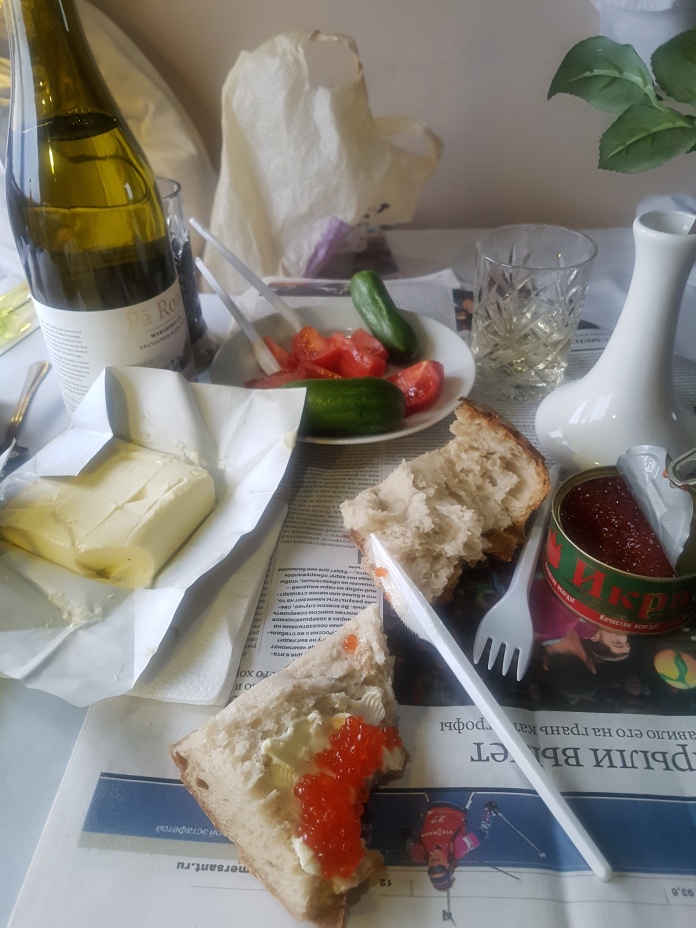 Dinner on a Train

We arrived to Murmansk early in the morning; our hotel, Azimut, was less than five minutes walking from the station right in the center on Five Corners Square (Pyat Uglov).  I was surprised though that there was no tourist information whatsoever at the train station since it turned out, to our big surprise, that Murmansk is indeed a big tourist destination. I had no plans or pre-booked any tours prior to arrival and was somewhat disappointed but our hotel had a big tourist desk and they were able to assist with literature and tour bookings.

We ended up taking three separate tours: The first was a night tour in search of the Northern Lights and actually was my least favorite. The deal was that if we don’t see the lights we get a partial refund. A minivan picked us up late in the evening and we drove for a good 5 hours back and forth in the freezing Tundra searching for the lights. Every 10 or 15 minutes we stopped and waited inside or outside for a glimmer of lights. As the night progressed I kept falling asleep and was less and less inclined to go out in a freezing -10C.  Hot tea and cookies were provided but it was still extremely cold.  At some point they took pictures of all of us and a tiny far away ray of green was used as a proof that we saw the lights so there was no refund, but in reality we didn’t see anything.  Needless to say, all the tourists were extremely disappointed.

The second trip to the coast thru Tundra was awesome. A full day packed of activities included a two hour drive to the Barents Sea coast, a freezing snowmobile ride, generous lunch, Husky farm and lots of stories and photo ops of a totally wild nature. 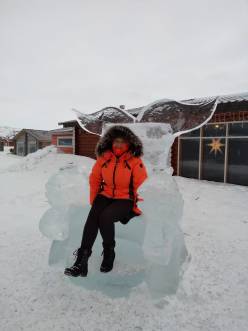 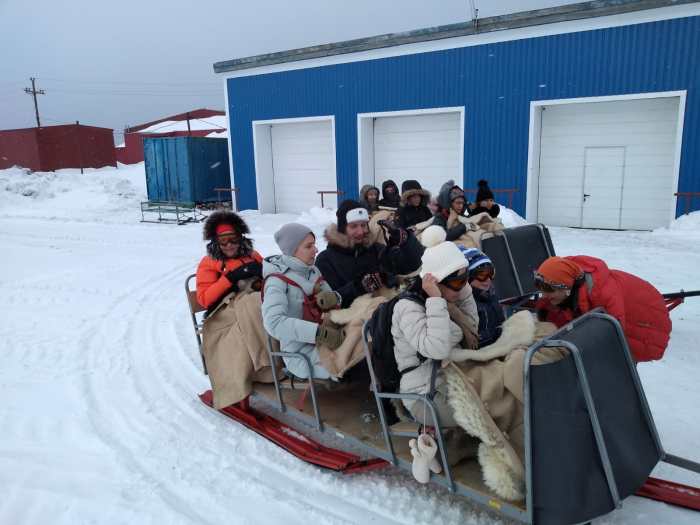 The third trip was a nice mellow visit to a Sami Village. Samis, also known as Laplanders, are indigenous people to the Kola Peninsula[i]  with their own language, traditions, food, clothing etc. I duly recommend reading up on their history before visiting.  Even somewhat “disneyfied” it was a cute village, we were served a traditional pie with tea, heard stories about Samis, danced shaman dances around the fire, tried on their traditional clothing and shown local traditional artifacts, fed deers (or maybe it was moose) and went on a short snowmobile ride.

Few words about booking a tour: we ended up booking all three with the same company as they offer discounts for multiple bookings.  I do not quiet remember the name of the company since all the names are very similar. However, it is very important to get a confirmation text or email regarding the agreed upon price. Since they were short on tourists at that time due to the beginning of the current pandemic, we bargained for a certain price but the guide who was actually collecting the fees was not aware of our deal and it took many phone calls and some stress to get to the bottom of the issue. So my recommendation is to have everything documented.

Since all the tours were out of town we felt that we didn’t really see much of the city so we actually stayed an extra day and moved across the square to hotel Meridian that offered a better price for the night.

In the city itself we tried all four of their notable restaurants, in the order of our preference: Tundra, White Rabbit, Tzarskaya Okhota and Terrassa. The last one was our least favorite, and I do not recommend it (mediocre and overpriced).

Murmansk played a very important role in World War II. Its port was where a lifeline of supplies and food arrived from the US and this is where most all the fishing that fed the entire Soviet Union during the war was done.  Round the clock factories packaging the food and the supplies operated here all throughout the war.  The city suffered severe bombings and destruction of most of its infrastructure.  Murmansk also served as the starting point to many northern expeditions for at least the last two centuries.

As such there are many monuments and points of interest thru out the city: Alyosha monument, commemorating a Soviet Soldier, a huge statute on a hill overlooking the city; Zhdushaya (waiting) monument, honoring the women waiting for their loved ones to come from the war; numerous monuments honoring Arctic Explorers and many more.  A highlight is probably the first nuclear ice-breaker Lenin, offering guided tours in Russian. It also conducts a two- week trips to North Pole in the summer for a mere 35 thousand US per person…

We didn’t find any live music venues but we did go to the local theater and it was fantastic (in Russian only, no subtitles). It was a nice surprise and the quality of acting was no lesser then in any capital city.