After a short break in travel due to work obligations I flew back to Bucharest to resume our trip. We decided to rent a car for the duration of the Romania trip for several reasons: it was very hot and tiring to do it on buses and since our time was limited we wanted the flexibility to cover more area.

The heat was oppressive, in the 40s (C), so we decided to start with the Black Sea Coast. Our first destination was Vama Veche. After about 3 hour drive we got to a great beach town: a very large strip of fine sand, and one after another beach bars and restaurants; all beach services with chairs, lounges, umbrellas and beach cabanas. The crowd, a mix of all ages and socio-economic situations, seemed relaxed and laid back.  We fell in love with the place immediately and decided to stay. We saw a rock band practicing for a free concert later that day which was an additional incentive to stay. We had no booked accommodations but took it easy hanging out at a beach bar enjoying the beach and relaxing. Sometime later in the afternoon we started to look for accommodations but there were none available: not expensive, not cheap, nada.   So we decided to be really cool and sleep on the beach.  We did have our sleeping bags after all and a car just in case.

We had a great dinner in Cherthana, a fish restaurant where they grill fresh fish right in from of your eyes and serve house wine in half litter carafes. After dinner we proceeded to the free concert area. Around 1am we got our sleeping bags, crawled into an empty beach cabana and fell asleep to the sounds of the concert that lasted till 5 am!!!  We were not the only ones sleeping on the beach, there were quiet a lot of other people sleeping in the cabanas, on beach chairs and just on the sand.  Around 6am it got cold and I got up to walk around.  To my surprise most of the beach bars still had a party going, people were dancing and drinking.

Surprisingly, all the parties were very peaceful: there were no ugly drunks, no fighting and the crowd wasn’t b rowdy. The atmosphere was very pleasant and civilized, more hippy then euro-chic. There was no sign of police or any other authorities. I guess people just know how to behave there.

I went back to my cabana and fell asleep till about 9 am when the beach attendants came in and tried to kick us out. At this point we were tired and sleepy and decided to just rent the whole thing for the day instead of moving.  It was about 20 USD and totally worth it.  Then we decided to spend another day and another night on the beach.  The second day was pretty much similar to the first.  Sunbathing, beach bars, dinner at the same place, late night music, etc. The only difference was that this time we knew that it goes on all night so we started later and went to sleep much later.  Unfortunately, around 5 am it became very cold and very windy.   Everybody started to leave the beach and we had no choice but to move to our car.  Even though it wasn’t very convenient, it was a small car, we slept till about 10 am.  At this point it was time to leave the beach and to find a decent hotel. 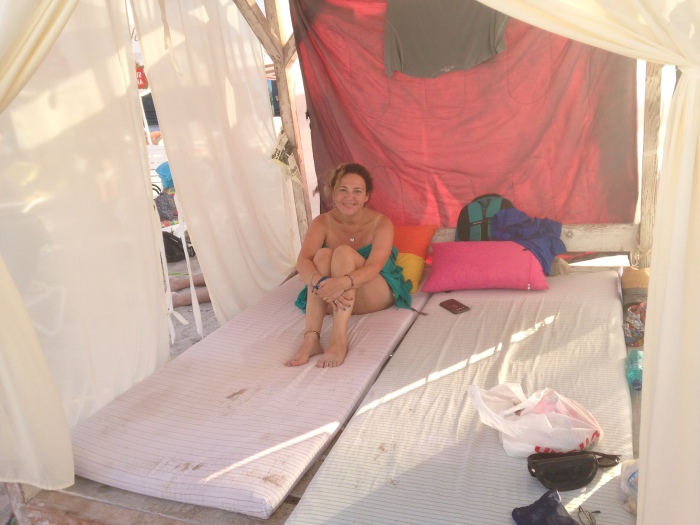 I was told that Romanians say that “you never really partied until you pulled an all-nighter in Vama Veche”. Now I know why.

Our next stop was Constanta, the ‘capital” of the coastal region. We got a nice hotel, Voila, right in the center of the historic area.  We desperately needed a good shower and a nice bed.   At 6pm we took a free walking tour of the city. It’s a nice historic but run down town.  It seems that unlike other areas of Romania that are getting a lot of funding for rebuilding, the coastal area is being left behind.  We saw some amazing beautiful old houses that are crumbling.  The beautiful synagogue building is condemned as being unsafe and its doors and windows are shut and nailed in. The main site is a gorgeous historical Casino building right of the promenade, but it is also closed for visitors being totally unsafe and is waiting for reconstruction funds from the EU.

As far as food goes, there is a lot of fresh fish and carp is their specialty in all its variations, grilled, smoked, fried, etc. There isn’t much of a night life in Constanta so we turned in after dinner. 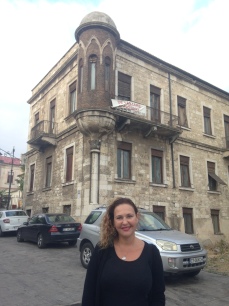 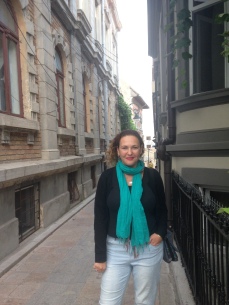 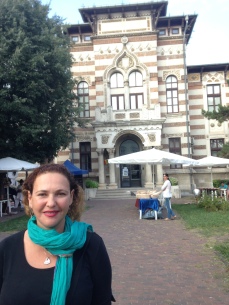 The next day, August 15, was a national holiday, St. Mary’s Day plus some sort of “army day”, I am not sure how the two are related, but we got to witness two of their air force planes doing various maneuvers and pirouettes in the air and some of them looked more like a near misses then planned exercises. We kept wandering if this is perhaps their entire air force or they have more planes.

Later, we drove to our next destination which was about 20 minutes away, in Mamaia. Mamaia Beach is the most know resort town in Romania and is also supposed to be a party place but with a different vibe from Vama Veche: More upscale and chick.  There was supposed to be a Nikki Beach there but I didn’t find it.

Accordingly, the hotel prices are unjustifiably very high.  We spend one night there staying in hotel Queen Vera.  It was a good location in the middle of the narrow long strip which is the town of Mamaia, just across from the beach.  The hotel provides vouchers for complementary beach chairs as well. The entire beach is comprised of beach clubs one after another, beach chairs, umbrellas and slick beach bars.   However, for some reason the town was empty and lacked the atmosphere that we enjoyed so much in Vama Veche. The weather was getting worse, it was windy and rainy.  After an overpriced dinner in overrated Chevalet restaurant we walked the entire town down south were some lounges with music were still open but the vibe was more Euro-Trash then swanky.  After one drink we called it for the night.

The next day we spent couple of more hours on the beach but it was still windy and rainy and we decided to move on.