There are two major lessons I have learned here: 10 days in Sicily is not enough and be ready to gain 10 lbs…

The main reason for our trip to Sicily was friends’ wedding but also an opportunity for a road trip across the island.

We began the trip by exploring Palermo, a typical Italian town with lots of Renaissance elements.  On the first night we went to the famous and richly ornamented opera house for a performance and then took a night tour of the Cathedral.  I duly recommend the night tour, there are much less tourists around and the views of Palermo at night are great. We were also lucky because there was an ice-cream festival going on till late hours of the night which added to the festive atmosphere.

The next day we took a free walking tour of the historical center and went to the Mercado di Ballaro market for lunch.  Italian markets are a must; large amounts of gorgeous food and the displays are overwhelming.  We ended up trying a little of everything which became a lot of food but it’s hard to stop eating when you see so much tempting food.

The drink of choice, Aperol Spritz was served everywhere and who am I not to join in the fad. For dinner I recommend Il Maestro del Brodo, it has an elaborate antipasto buffet and an array of fresh fish. 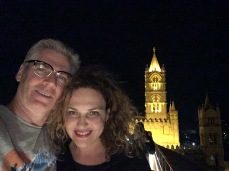 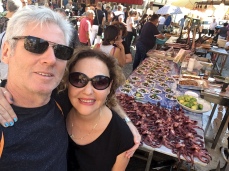 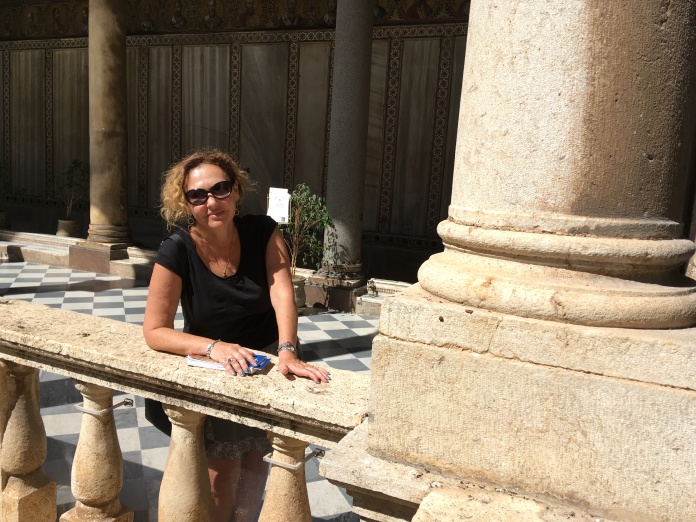 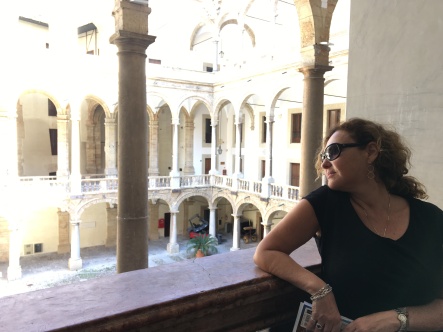 After Palermo we stayed in Casteldacchia, 45 minutes east of Palermo, for three nights because of the wedding, but otherwise there is no point to linger in the area. One of the days free of the wedding events we drove east to Cefalu located on the Tyrrhenian Coast and spent few hours on the beach and then couple of hours strolling around the postcard pretty streets admiring the Arab-Norman architecture. The town is adorable and apparently the movie Cinema Paradiso was filmed here. We finished the afternoon on the main square; drinking…you guessed it Aperol Spritzes.

The morning after the wedding we started our road trip.  It was extremely difficult to decide which places to visit and which to skip and most of the time we felt rushed as there was so much to cover.  My crew was rebelling from time to time because I didn’t allow lingering as much as they wanted in each place but they were never sorry to see the next destination as everything we saw was worth the visit.

The first stop was the hillside town of Monreale, home of the Sicily’s greatest cultural treasure, the Cathedral of Monreale which incorporates the Norman, Arab and Byzantine elements and is one of the most impressive legacies of Italian Middle Age architecture.  You should allow at least two hours at the site. The cute restaurants around Paza Duomo were very tempting but we rushed off to the next destination.

The next destination is kind of questionable in my mind. We drove on very long and bad roads to the village of Corleone and I am not sure that the result was justified. The village itself is not interesting by any means and the only worthy attraction is the mafia museum, CIDMA, which recounts the history of the Sicily’s Cosa Nostra crime syndicate in photographs.   For people who grew up on Godfather movies glorifying the mafia, the visit maybe a total disappointment, as the museum depicts its violent and gruesome side. On the other hand we felt that if we didn’t go see it, we would be profoundly sorry later.  Another problem is that the village of Corleone is very much out of the way from anything else worth visiting.  The detour and the visit took about 5-6 extra hours form an already tight schedule and I am not sure I can recommend it.

Our next stop was Trapani on the west coast, a cute port town and a base for visiting Erice. Narrow streets of the historic center are a mix of Moorish and 17th/18th century baroque. It is worth couple of hours of exploring its pedestrian only Corso Vittorio Emanuele and Cattedrale di San Lorenzo.   The local food to taste is fish couscous soup, a result of Trapani being on a sea route to Tunisia.  We stayed at Alla Marina apartments, a spacious room in a historical palazzo right in the center.

The next day we ascended by a funicular to a medieval walled town of Erice, located on mount Eryx, about 750 m above sea level. The town is lovely but we were extremely unlucky with the weather.  As we entered the funicular it started to rain and continued to pour all day till very late at night. We did stroll a bit the narrow cobblestone streets but being soaking wet and cold did not add to our enjoyment. The town is famous for its almond sweets, dolci ericini, which we tasted of course.  It is also part of the wine trail, Strada del vino E dei sapori Erice DOC, so we did some wine tasting in local stores and bars. But at the end we had to surrender to bad weather and rushed down to our car by the entrance to the funicular.

Erice in the rain

Our stop for the night was a town of Marsala.  After a long and wet day we had dinner at Divino Rosso, where we ate lots of great dishes and drank a lot of local wine.  The main drag is Via XI Maggio with most of the historical buildings located between Piazza della Vittoria and Piazza della Republica. I wished we could stay longer in the area to explore the town and the wineries but unfortunately again we felt rushed to move forward. 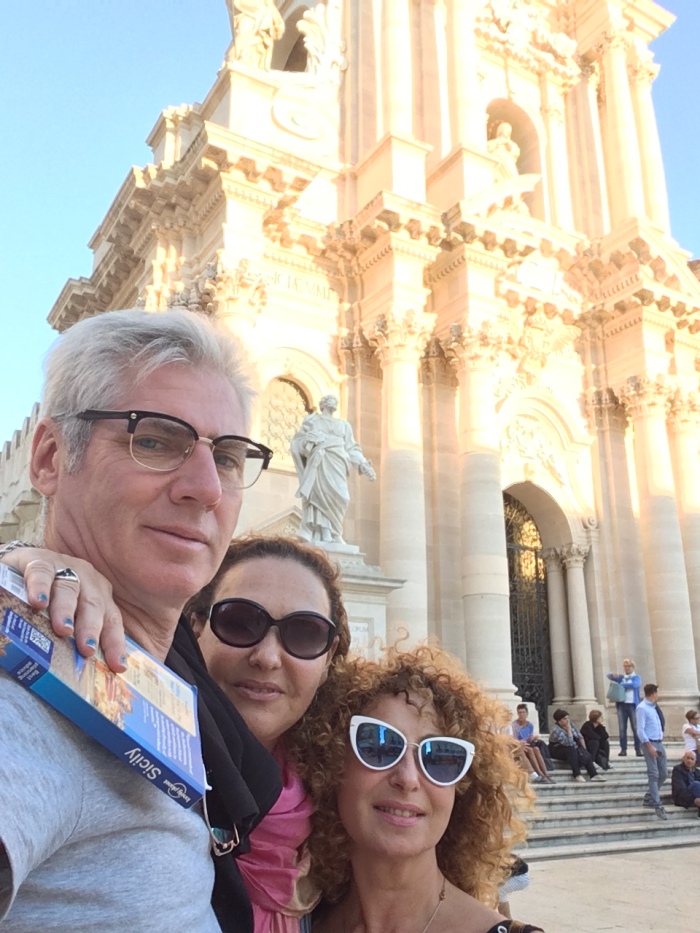 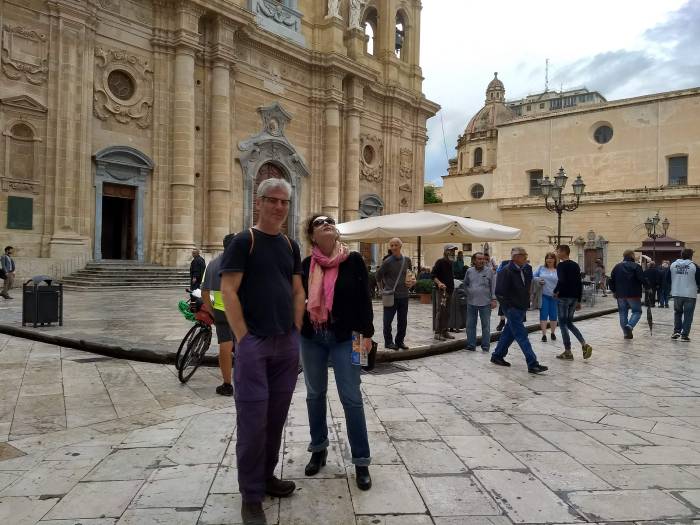 Our lunch stop surprised me the most.  Mazara del Vallo and its historic center called La Casbah made me feel more in Morocco then Italy due to its narrow streets with colorful hand painted tiles and Arabic signs. The main must-see attraction in the city is the bronze Dancing Satyr fished from the deep sea by fishermen in 1997 and on display at the Museo del Satiro (accompanied by an informative video). Originally the statute was used in the Dionysian processions. The recommended lunch place is Eyem Zemen serving Tunisian and sea food delicacies was worth the wait. 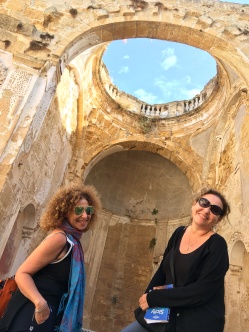 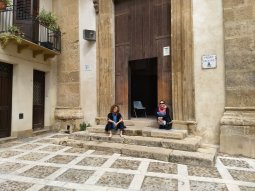 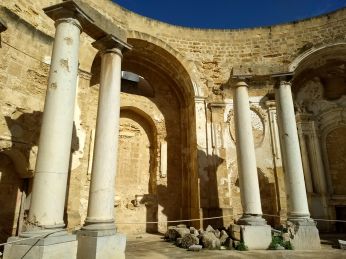 We stopped for the night at Agrigento, another typical Sicilian town but it was raining very hard so we didn’t venture beyond the nearest bar and called it for the night early in preparation for the Valley of the Temples visit the next day.

Valley of the temples is the most significant archeological site in Sicily. It sprawls over 1300 hectares and encompasses the ancient city of Akragas. The site boasts well preserved Doric temples and is as impressive if not more so then Efes in Turkey or the Acropolis in Athens. The site is divided into Eastern and Western Zone and has two entrances accordingly.  Frankly, the signs to the park are not great and it took us some time to understand where to enter and where to park.  It is most advisable to rent an audio guide, and not to forget a hat and water since the area is completely exposed to the sun. 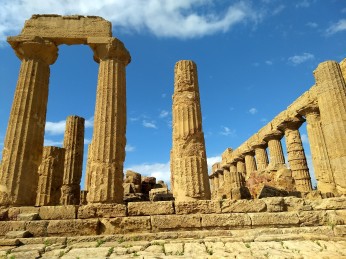 After spending few hours walking the valley we drove towards what is known as the Baroque towns.  There are three of them: Ragusa, Modica and Noto. Trying to cover as much as we could, we had lunch in Modica, famous for its chocolate production, and slept in Noto. Both are lovely.  The main street to stroll in Modica is Corso Umberto I, and this is what we did, but shortly after lunch in a local trattoria and sampling some chocolate we had no choice but to move on.

We did spend a lot more time in gorgeous Noto.  The main pedestrian street Corso Vittorio Emanuele is flanked by baroque palazzi, churches and numerous restaurants, bars and ice cream shops. We enjoyed strolling around the main street and ended the evening in a live music venue Anche gli Angeli. The town is so cute that we spend the next morning there as well walking around, visiting some churches and taking plenty of pictures.

Our next stop Syracuse turned out to be a total gem.  In its heyday, almost 3 thousand years ago, this was the largest city in the ancient world, bigger then Athens and Corinth.  Syracuse is actually the mainland while the place to be is Ortygia, an island connected by a bridge.  It is where the spectacular Piazza del Duomo, gorgeous fountains and all the action are. We were also surprised to learn that Ortygia is a home to a large la Guidecca, an old Jewish Quarter.  It is worthwhile to take a tour of an ancient Miqwe, a ritual Jewish bath, that was discovered under a fancy Alla Guidecca hotel (check for tour times).

It is a good idea to go on a boat tour around the island leaving from the marina, Largo Porta Marina, located on the west side of Ortygia.  The area bellow the marina is peppered with lots of bars and is a good place to catch the sunset while sipping Aperols.  For dinner I recommend fresh fish at any of the restaurants around the market area north of the Duomo. Syracuse and Ortygia are definitely worth few days and I am hoping to come back at some point.

Next to last stop was a rough around the edges Catania on the Ionian Coast on the west side of the island.  It’s important to note that Catania has a large airport that offers more flights then Palermo and it is very convenient to fly into one and leave from another and there is no reason to drive back all the way to Palermo unless you are doing the entire loop around Sicily.

The historical center is obviously around Piazza del Duomo and its fabulous fountain, Fontana dell’Enfante. There are good restaurants around La Pescheria, fish market.  We stayed in Il Duomo B&B right across the Piazza in a cute room with small balcony.  My crew decided to go to Mt. Etna the next day but I chose to stay and to explore Catania.  I walked around for several hours and got a good idea of this vibrant but somewhat dilapidated city and ended up in an outdoor bar across historic and beautiful Teatro Massimo Bellini which was built in 1890 specifically for the homegrown composer Vincenzo Bellini; no connection to Bellini cocktail which was named after a different artist, a 15th-century Venetian painter Giovanni Bellini.

Our last town was the spectacular perched on a mountain Taormina. Taormina is extremely touristy, so much that sometimes it’s difficult to make your way thru the crowds. It is very popular and expensive but nevertheless adorable.   Life centers on the pedestrian Corso Umberto I with its numerous shops, bars and restaurants. Our B&B’s owner gave us directions to the all night parking at the entrance to Taormina and met us there which was very useful. Besides window shopping and crowd gazing we attended the local theater where opera singers performed areas from various famous operas and the town’s main attraction, the ancient Teatro Greco.  This premier site was built around 3rd century BC during the ancient heyday of Taormina. Apparently the city has been enjoying its second period of glory since the 18th century due to endless waves of European tourists. It is said that DH Lawrence lived here for about three years between 1920 and 1923. 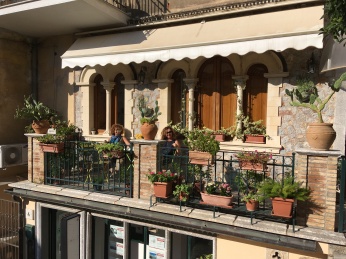 We spend our last night in Catania because we had a very early flight from Catania airport.